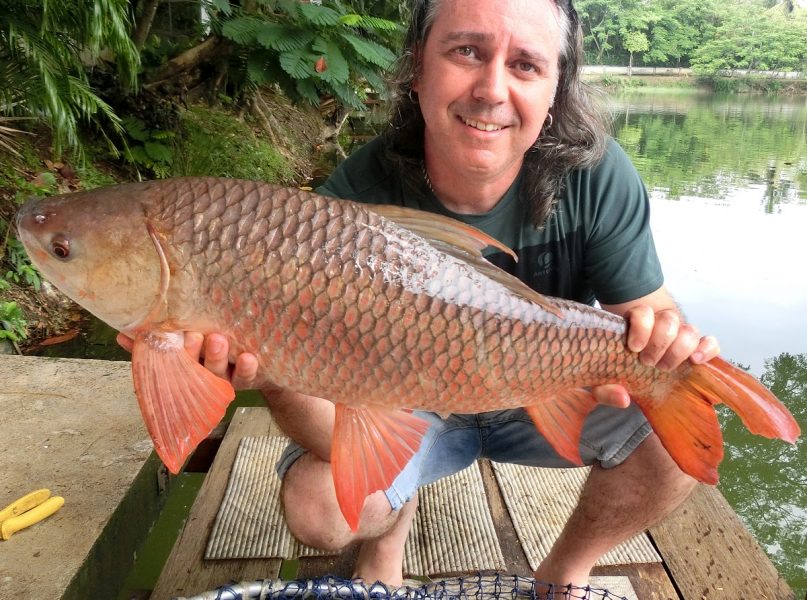 Happy to welcome Daniel from Spain again after four years.

Conditions were quite difficult this morning due to the heavy downpour for several hours, but Daniel managed to catch a beautiful Redtail catfish on sausage, followed by a huge Alligator Gar two hours later, estimated to 174+cm.

Our carp were active in the late afternoon, and Daniel landed two beautiful Rohu in a similar size and a stunning Mud Carp (Mrigal) of 78cm in length, before the heavy rain started again. Cheers!

Tobias (Germany) checked in for one night, but unfortunately the fishing was really slow and only a few small fish were caught during the day. But finally he managed to catch a beautiful Julliens Carp in the late afternoon.

Jordy Hernandez DaSilva from Texas had an excellent start in the morning of the 17th September with a beautiful Siamese Carp in a medium size!

During the day he managed to catch a couple of Redtails, and in the late afternoon it was again ‘Alligator Time’ with a wonderful fish, estimated to 165cm in length, being caught on chicken heart. Cheers!

Gregg (USA) managed to catch his first Siamese carp on 21th September, not a giant but a nice fish in perfect condition, estimated to be 45-50lb. Cheers!

September is apparently the month for massive Alligator Gar at Dreamlake Resort.