Below you will find information about many of the exotic tropical fish species which can be caught when fishing  in and around Chiang mai which anglers can target on their fishing holiday in Thailand.
Dreamlake fishing Resort, Borsang lake, or any one of the surrounding Chiang mai fishing Lakes or reservoirs are stocked with many wonderful species that should be of interest to most anglers who are fishing in Thailand. There are both Thai native fish species like the world’s largest catfish species Giant Mekong Catfish, Striped Catfish, Spotted Featherback and also imported fish species like the Alligator gar and Arapaima stocked in the man made purpose built fishing lakes and fishing parks in Chiang mai. In the reservoirs just out of Chiang mai city the main target species are mainly Thai native such as the Giant Snakehead and the Jungle Perch with lure fishing tactics.
For anglers who want to go Carp Fishing in Thailand then there are several more species that can be caught in and around Thailand’s second city of Chiang mai such as the rare and elusive Julliens Golden Price Carp, Rohu or Indian Carp,  Small Scale Mud Carp and not to forget the world’s largest carp species the Giant Siamese Carp
For Lure, Fly and Predator fishing anglers then fishing in Thailand and especially the lakes and fishing parks around Chiang mai offers encounters with exotic fish species like the Striped Snakehead, Peacock Bass, Red Bellied Pacu, Tiger Catfish, Dog Eating Catfish and Barramundi. 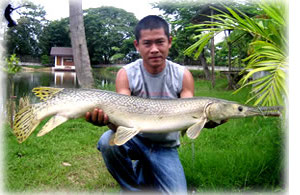 Name: Alligator gar
(Atractosteus spatula).
Status: Introduced to Thailand fishing lakes from USA. Alligator Gar’s can grow to  a max weight of about 100kg and up to 2m length. They grow large in Dreamlake fishing resort Chiang mai and will readily take a range of baits. The Alligator gar is a true…More>> 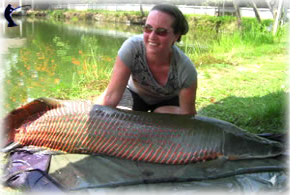 Name: Arapaima / Pirarucu (Arapaima gigas).
Introduced to Thailand into many fishing lakes and fishing resorts from the Amazon
They are very hard-fighting and immensely powerful fish but also very delicate and should always be treated with respect. The Arapaima is one of…More>> 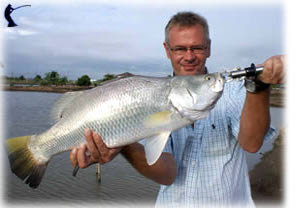 Name:Barramundi (Lates calcarifer).
Staus: Native. The Barramundi or Asian Sea Bass is found throughout South east Asia to Northern Australia. It is very popular in Thai cuisine and a prized sport fish. Barramundi can be found in coastal waters, esturies and rivers in both Saltwater, Freshwater also…More>> 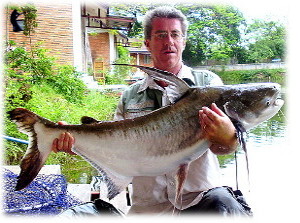 Name: Chao Phraya Catfish (Pangasius sanitwongsei)
Staus: Native: The Chao Phraya catfish is found in the Mekong basin and Chao Phraya river systems and also stocked in many various lakes and fishing parks in Thailand including Dreamlake fishing resort. This is a predatory catfish which is a strong fighter and can be caught day and night on a large range of baits both live and dead…More>> 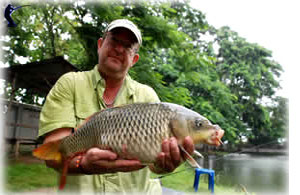 Name: Common carp (Cyprinus carpio).
Staus: Native. The Common Carp is found in fishing various lakes and resorts in Thailand and naturally occurring in many rivers and ponds. Anglers fishing on holiday in Thailand will find that strangely the Common carp don’t reach similar large…More>> 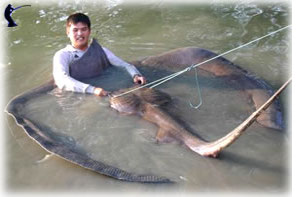 Name: Freshwater Stingray
(Himantura chaophraya).
Status: Native.
Rare in its natural environment with main populations around the Chao Phraya and MaeKlong river systems in Thailand. Due to its size a very strong fighter which sticks to the bottom, battles can go on for hours. For anglers fishing…More>> 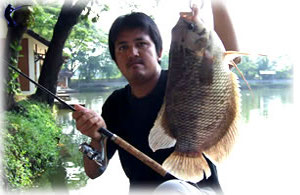 Name: Giant Gouramy (Osphronemus Goramy).
Status: Native.
Max. size 8 kg. Rare in North Thailand outside of fishing parks. Sometimes we catch fishes up to 4 kg at Dreamlake. For the patient and skilled angler fishing in Thailand then Fly fishing for these species with mainly dry…More>> 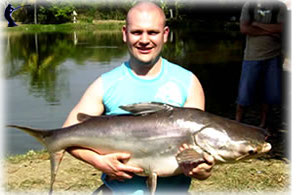 Name: Giant mekong catfish (Pangasianodon gigas).
Status: Native and critically endangered in his natural habitat, the Mekong River. It is one of the largest freshwater fish worldwide growing to max size of 300 kg +. Because of his enormous growing rates and fighting power the Mekong Cat is stocked to many..More>> 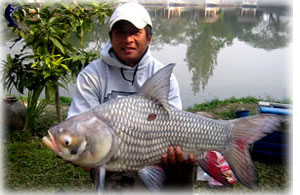 Name: Giant siamese carp.
(Catloarpio Siamensis).
Status:Native.
The largest Carp species worldwide with a maximum size of over 250 kg. Known for its hard fighting strength and wary nature. The Giant Siamese Carp is a great catch for anglers fishing in Thailand. This Fish is not common to…More>> 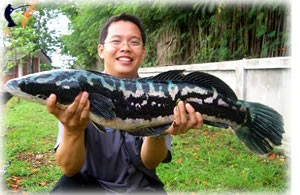 Name: Giant Snakehead (Channa Micropeltes).
Status:Native.Extreme, fierce and aggressive predator. Snakehead fishing in Thailand can be very exciting and Chiang mai has several great fishing destinations to meet the top predator fish in Thailand’s waters. The Giant Snakehead is one of the most…More>> 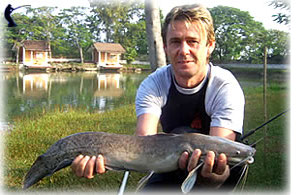 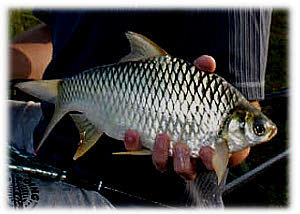 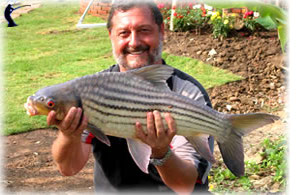 Name: Jullien’s Golden Price Carp (Probarbus jullieni).
Status: Native. Very  rare outside of fishing parks and fishing resorts in Thailand. The Mae Kuang Dam a fishing destination in Chiang mai holds fishes up to 50 kg. The Golden Price Carp is another of Thailand’s Mega fish which is on…More>> 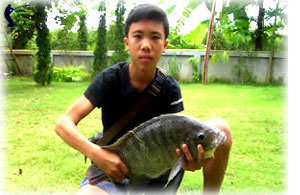 Name: Nile Tilapia (Oreochromis Niloticus).
Status: Introduced.
One of the most common fish encountered when fishing in Thailand. A very very popular food fish in Thailand with a good taste and can be found in most restaurant’s or street market stall’s around Chiang mai…More>> 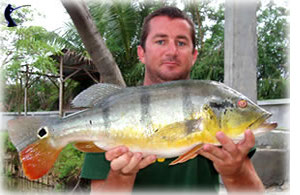 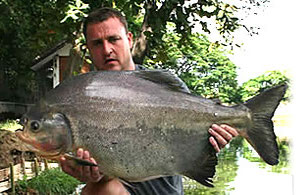 Name: Pacu (Piaractus brachypomus).
Status: Introduced to almost every Thailand fishing park and lake due to its rapid growth and hardy nature. Native to the Amazon basin the Red bellied pacu is a very strong fighting fish and takes almost any bait, growing to max weight of about 20 kg. They…More>> 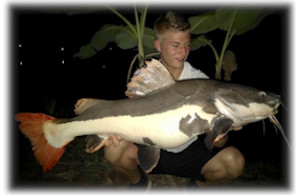 Name: Redtail Catfish (Phractocephalus hemioliopterus).Status: IntroducedThe Redtail catfish is a native of the Amazon basin but has been introduced to many fishing lakes in Thailand including Dreamlake fishing resort Chiang mai. Best baits: The Redtail will take dead baits, earthworms and chopped meats. A very good fighter which will stick to the bottom and make charging runs to snags…More>> 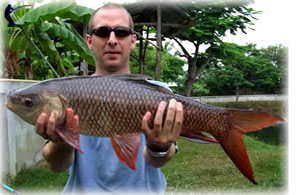 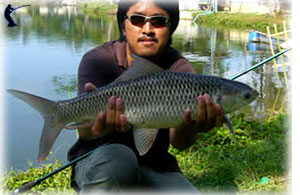 Name: Small Scale mud carp (Cirrhina microlepis).
Status:Native. Vegetarian to max. size of 15 kg. Another of the many carp species available to angler fishing in Thailand on holiday or long stayers. Target with normal light carp gear or float rod, will take a variety of popular Thailand fishing baits such as corn, nuts…More>> 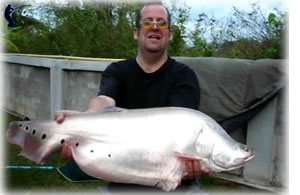 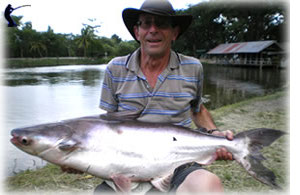 Name: Striped catfish (Pangasianodon hyphophthalmus).
Status: Native. A real good fighter to max size of 30 kg. The Striped catfish is a common fish that will be encountered by anglers fishing in Thailand. It is stocked in almost every lake, fishing park, river, and pond in Thailand. We catch him very often between 5-15 kg…More>> 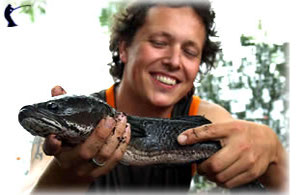 Name: Striped Snakehead (Channa Striata).
Status: Native. Very common all over Thailand, it breeds in almost any size of water body. With patience and good casting can be readily taken on top water frogs and poppers. Seem to flourish in habitat that does not hold the Giant snakehead…More>> 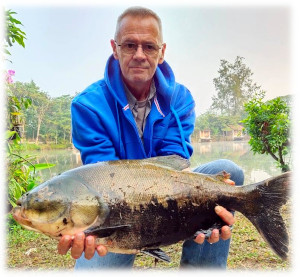 Name: Tambaqui (Colossoma macropomum) Status: Introduced to Dreamlake Chiang mai. It is native to tropical South America. It is also known as the ‘Black Pacu’, ‘Black finned Pacu’ or the ‘Giant Pacu’.Recently stocked into Dreamlake Fishing Resort Chiang mai in December 2019 these fish are hard fighting and will take a wide range of baits…More>> 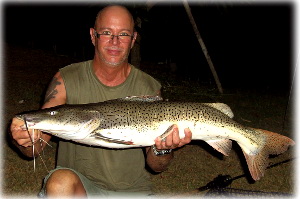 Name: Tiger Shovelnose Catfish (Sorubim lima).
Status: Introduced
The Tiger Shovelnose catfish or Barred Sorubim as it is also called is a native of the Amazon basin but has been introduced to many fishing lakes in Thailand like Dreamlake Fishing Resort. Thais like to call it the Plah…More>> 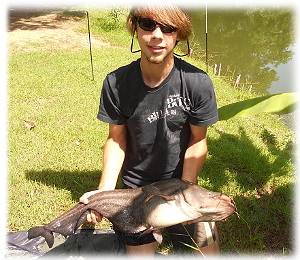 Name: White Sheatfish. (Wallago attu)
Status: Native. Really rare in the wild, but sometimes caught by local fishermen in Mae Kwang Dam up to 30 kg. The Wallago can grow to 2.5 m in length. The Wallago attu is also know as the “Man eating catfish” after it supposedly developed a taste for Human flesh after feeding on dead bodies which had been laid to rest in…More>>

Mark and Simon Sturgess (USA) checked in this morning at Dream Lake Resort for two nights. After a real cold night (12 °C) I expected that the fishing would be really slow, but surprisingly the fish were quite active and hungry. Simon managed to catch 2 'Striped Catfish' in medium size and a beautiful 'Rohu' in specimen size on bread. Mark hooked into a good sized 'Siamese Carp' at lunchtime, the fish was safely unhooked and released in the water...cheers, and fingers crossed for the rest of the session!👍😍 ... See MoreSee Less

Share on FacebookShare on TwitterShare on Linked InShare by Email

Paul Walker (UK) fished with us on Monday at Borsang lake and he had a lot of fun with hard fighting catfish during the day.
Yesterday he checked in at Dreamlake for one night. Short after arrival in the morning he lost two fish, and in the afternoon he hooked into a really huge fish but unfortunately the hook pulled out after an epic fight of nearly 45 minutes.😳
Finally he managed to catch a bunch of small Redtail catfish and Tambaqui in the evening....cheers!👍

Share on FacebookShare on TwitterShare on Linked InShare by Email